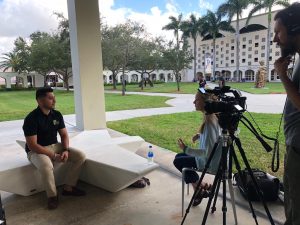 Florida is one of 35 states that tie college funding to graduation rates. A recent study, “The Pell Divide,” finds a difference in graduation rates between students who receive funding assistance from Pell Grants and those who don’t.

This year, Florida International University (FIU) was awarded an extra $73 million in funding aimed for student success. The extra funding was calculated based on key measurements such as graduation rates and post-graduation employment, among others.

Tamara Hiler, author of a study published by the Washington-based think tank Third Way, analyzed data released by the Department of Education on graduation rates at four-year universities. Hiler concluded that on average, an institution’s wealthier students tend to graduate faster than those students with lower-to-moderate incomes. However, the focus of this study was on low-income students qualified to receive Pell Grants. The report, called “The Pell Divide”, discovered an 18% gap in graduation rates between students who are awarded Pell Grants and those who are not. However, this was not the case with FIU.

Even though FIU has a large number of low-income students enrolled, it was found that students who use Pell grants graduate almost at the same rate as non-Pell recipients. This was achieved due to FIU’s commitment to its students and their success.  FIU took a unique approach and tripled its advising staff, added free tutoring centers, created success in life coaching, and added many other special services with the purpose of helping students achieve their goals.

Success in life coaches promote accomplishments and development in and out of the classroom. These coaches take an interest on how the student is developing as a person, maturing, mental stability, stress coping, and mentoring. In other words, these coaches assist students on all aspects of life.

FIU used an approach called high-tech, high-touch, which uses predictive analytics so advisers can reach at-risk students early. Some of the criteria used to determine this includes but is not limited to first-generation college students, unmet financial needs, and poor grades in high school.

Danny De Leon is a Pell Grant recipient and first-generation college student majoring in civil engineering. He was flagged by analytics before he was even allowed to register for classes. In this situation, an advising hold is placed so the student is forced to meet his or her adviser. This was the case with De Leon. He had to meet with his assigned undergraduate adviser, JoAnna Sanabria, to get the hold removed. She explains how she helps students plan out their courses in a way that ensures they graduate within four years. However, just like De Leon, many students become attached to their advisers and often credit them for keeping them on track.