Left lane loafers: Stop blocking traffic and get out of the way 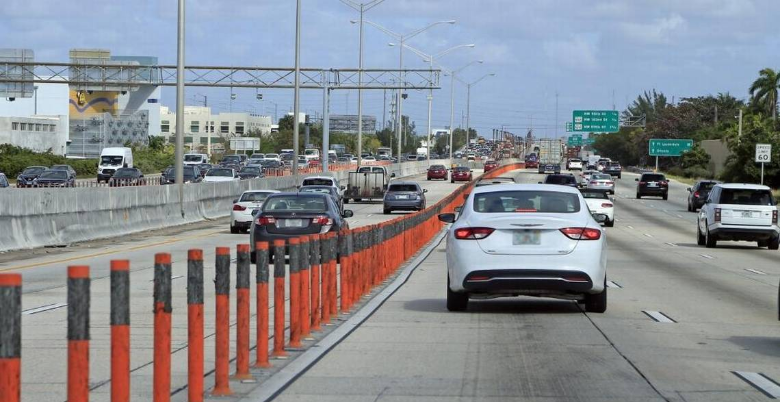 Like roadkill decomposing on the pavement, so are the days of our lives wasted in traffic congestion. A primary thief of those precious hours — lost not only to the clock but in lifespan shortened by mental anguish — is the left lane loafer.

You know and loathe the type. The left lane loafer, also known as the left lane laggard, left lane lollygagger or assorted left lane [expletives deleted], is the driver who goes slow in the passing lane. He uses it as his own private couch, content to hang out while a long, angry queue builds in his wake.

The left lane was designed by roadway engineers to be occupied intermittently by vehicles overtaking other vehicles. It is not the la-di-da travel lane. It has a purpose, and that purpose is speed.

Left lane hogs who clog the flow add to the daily burden that has made traffic the No. 1 annoyance and destroyer of quality of life in U.S. cities. Miami, home to many of the world’s worst drivers, ranks No. 6 on the list of metro areas with the most congestion in the national Traffic Index by TomTom, a navigation and mapping company. Los Angeles, San Francisco and New York ranked 1-2-3, respectively.

In Florida and 44 other states, obstructing traffic in the left lane is against the law. Most states follow the Uniform Vehicle Code and require drivers to keep right if they are going slower than the prevailing speed of traffic, regardless of the speed limit. Breaking Florida Statute 316.081 by “proceeding at less than the normal speed of traffic” in the left lane or staying there when “the driver knows or reasonably should know that he or she is being overtaken in that lane from the rear by a motor vehicle traveling at a higher rate of speed” is a moving violation punishable by a $179 fine and three points on your license.

In an effort to reduce the number of left-lane slowpokes, Washington state troopers campaigned with this slogan: “Camp in the woods, not the left lane.”

In South Florida, the Miami-Dade Expressway Authority and Florida Highway Patrol have placed warnings on digital signs: “Slower traffic keep to the right.”

But the dawdling persists, another manifestation of the obliviousness, ignorance and hostility that infects not only driving behavior here but all modes of uncivil interaction.

Murphy said left lane loafers are a major cause of road rage, which leads to unsafe passing maneuvers in the right lanes or tailgating or vengeful braking, which leads to collisions, which leads to more traffic jams. The American Automobile Association says 56 percent of fatal crashes are caused by aggressive driving.

“People get so frustrated that they can’t get around the slower driver, so they end up honking their horn, flashing their lights or tailgating, and the person in front slams on their brakes,” he said. “Or the faster driver has to pass on the right, then cuts back in front and slams on his brakes.”

Even worse: Multiple laggards lined up in a blockade.

Distracted drivers are often cruising in the left lane, unaware of the bottleneck they are causing.

“People are texting or talking on the phone and they are so focused on something other than the road that they don’t even realize they need to get out of the way,” said Florida Highway Patrol trooper and Public Affairs Officer Joe Sanchez. “This statute was created to keep vehicles from impeding the flow of traffic. They are increasing our traffic problems, which is the dominant issue in Miami today.”

Troopers are usually too busy dealing with speeders and accidents to cite left-leaning obstructionists.

“We do write tickets for it, but we also focus on education,” said FHP Lt. and Public Affairs Officer Alex Camacho. “It’s a question on the driver’s test. It’s on page 31 of the exam manual. People can’t claim they don’t know about the law but we often have to explain it to them. Yes, the person behind you may be speeding but it’s not up to you to police them, and you’re not allowed to block them.”

Why is left lane lollygagging so prevalent in South Florida, where our drivers seem to fit the extreme profiles of either Mad Max or Mr. Magoo? In Germany, slipshod or inconsiderate driving is not tolerated.

One solution on the horizon is the advent of self-driving cars. Mohammad Hadi, professor of transportation engineering at FIU, said the current average highway lane capacity of 1,800 to 2,000 cars per hour could increase to 4,000 with autonomous vehicles that drive faster and closer together and follow the rules of the road.

At The Ticket Clinic, citations for left lane violations are infrequent because it is more difficult for police to monitor than, say, setting up a post at a stop sign or stoplight or speed trap. If the law was enforced more often, there would be more compliance, said Ted Hollander, a partner at the law firm that has handled more than 3 million cases.

“Police presence does change driver behavior because a ticket is going to sting,” Hollander said. “I absolutely see people sitting in the left lane going 50 mph all the time. They’ll stay there because they are not paying attention at all. Half the time they are on their phone or texting and causing a dangerous situation of forcing other drivers to pass on the right.”

South Florida also has a volatile mix of drivers clashing on the roads, including tourists, the elderly and recent immigrants who are accustomed to a different driving culture.

“The majority of people living here migrated from other countries,” Miami-Dade Police spokesman Alvaro Zabaleta said. “They’ve been driving a certain way for 30 years and you’re not going to change those habits quickly.”

Zabaleta cited Miami drivers’ rep for “a lack of patience and a lack of courtesy.”

“The aggressive attitude is, ‘I can’t let him in because that one, single car is going to slow me down by one second,’” he said. “You’ll notice as you drive north in the state, things get better. People will move out of your way.”