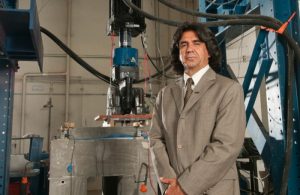 FIU Bridge Engineering on National Public Radio – Academic Minute
Bridges are a vital part of transportation, but they’re in need of replacement. Atorod Azizinamini, professor and chair of accelerated bridge construction at Florida International University, examines three repair methods. Dr. Atorod Azizinamini was appointed by the College of Engineering and Computing at Florida International University (FIU) as the Chair of the Department of Civil and Environmental Engineering at FIU in January of 2011. Dr. Azizinamini came to FIU from the University of Nebraska-Lincoln, where he was a Distinguished College of Engineering Professor and the Director of National Bridge Research Organization. A specialist in bridge engineering and expert in the field of accelerated bridge construction, he has been instrumental in facilitating the use of advanced materials and technologies in bridges by educating professional engineers and conducting major research studies. Dr. Azizinamini has also been an entrepreneur and a leader in developing innovative bridge systems and implementing novel concepts in practice. His patented “Folded Plate Girder” system provides a cost-effective solution for replacing deficient short span bridges, which account for the majority of the 650,000 bridges in the U.S. bridge inventory.

Dr. Azizinamini has received a number of awards, including the Civil Engineering Research Foundation (CERF) Charles Pankow Award for his innovative bridge system, the American Institute of Steel Construction (AISC) Special Achievement Award for his significant contributions to steel bridge engineering and its impact on the steel industry, the AISC’s 2005 Prize Bridge Competition Merit Award for his outstanding design in structural steel-Medium Span Bridge Category, the American Iron and Steel Institute (AISI) Innovation in Steel Bridge Award for his valuable contributions to High Performance Steel, the Federal Highway Administration (FHWA) “Partnership in Excellence Award” for his contributions to the Accelerated Bridge Construction, and the FHWA’s “Major Achievement Award” for promoting the use of High Performance Steel in the U.S. Dr. Azizinamini has served as an advisor to projects in many countries, including the Republic of Korea, for incorporating advanced materials in bridges.

Dr. Azizinamini’s research activities have been diverse. In the early 1990s he conducted a number of projects funded by the National Science Foundation to develop technologies for utilizing High Performance Concrete in buildings and bridges, with an emphasis on highly seismic areas. In 1995, he was selected through NSF to be a member of the U.S. delegation to work cooperatively with Japanese researchers to develop technologies for the next generation of high-rise buildings in seismic regions. Accelerated Bridge Construction https://academicminute.org/wp-content/uploads/2018/01/01-01-18-Florida-International-Accelerated-Bridge-Construction.mp3 It’s something many of us have to do to get to work or school every day – drive over a bridge. What most don’t realize is that the majority of the country’s bridges were built before the 1970s and were designed for a 50-year lifespan. With increasing deterioration and bridges designed to carry much less traffic than they currently do, we are facing a crisis.There are more than 607,000 bridges in the U.S. and about 25 percent of them need to either be repaired, or completely replaced. Yet, these repairs are often put-off as long as possible because they’re costly, can take months, affect traffic flow and have an economic impact on the surrounding communities. Construction activities on roads are also a magnet for accidents. What if fixing our bridges could be done quickly, incurring minimal impact to the area.

We’ve spent the last 20 years researching Accelerated Bridge Construction and with today’s methods, bridges can be repaired or even replaced in as little as a few days! There are three repair methods gaining popularity in the U.S. The first uses a self-propelled modular transporter to bring in a bridge that is built nearby and then installed once the old bridge is demolished. The second, the slide-in-method, is the most popular method. It involves building a bridge alongside the old one. The old bridge is torn down, and the new one simply slides in. The third option is the modular method, which requires making components of the bridge offsite in sections and then the sections are brought to the bridge site to replace the existing structure. These techniques allow bridges to be replaced or retrofitted safely, quickly and efficiently. With more than 200 million trips taken daily on the nation’s deficient bridges, accelerated bridge construction is a necessary paradigm shift for bridge repair.