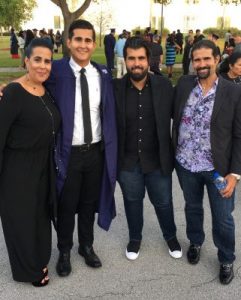 Alvarez and his family

Imagine being more than halfway through college and then getting diagnosed with cancer. Alexander Alvarez didn’t have to imagine it; he lived it.

This past weekend, Alvarez graduated from FIU with a bachelor’s in civil engineering, but the journey here was anything but easy. While in his junior year, he got a diagnosis that would change his academic trajectory and his life.

“I’ve never really liked hospitals,”Alvarez said. “Whenever I was sick, I’d try to figure it out on my own.” And that’s exactly what he did when a nagging cough just wouldn’t go away. But then one day, during a coughing spell, his back muscles gave in, and he was experiencing chest pain. He knew he had to get to the hospital.

There, doctors diagnosed him with pneumonia and prescribed him antibiotics. He’d have to stay at the hospital for a week, so he called his mom and asked her to bring him his laptop and backpack. Alvarez, a student in the College of Engineering & Computing at the time, started emailing his professors to let them know he’d be absent for a week, but still intended to complete his assignments. “I thought it was a temporary thing.”

He was wrong. An observant doctor noted that when patients have pneumonia, they cough up fluid, but this wasn’t the case for Alvarez. The doctor ordered a PET scan of his lungs. The reason fluid wasn’t coming up – a giant mass measuring 9 x 8 centimeters was sitting right on top of his lung. Next, came a biopsy, which revealed a scary diagnosis: Hodgkin’s Lymphoma.

Alvarez was just 22 years old – in fact, the diagnosis was delivered on March 31st, which happened to be his birthday.

“It was shocking to me. Immediately I thought, ‘I’m going to die,’” said Alvarez. But the diagnosis was hopeful – Hodgkin’s Lymphoma is very treatable, but the therapy was aggressive.

Alvarez began to worry about school. He had wanted to become a civil engineer since he was a child, after learning about the business from his father. His family couldn’t afford daycare so he would accompany his dad, a contractor, to job sites. “One of my memories was hammering nails – I loved construction.” His dad, who came from Cuba at age 16, worked his way up from being a handyman, and had high aspirations for his son to go to college and become an engineer. Alvarez was already working an internship as an assistant superintendent at Panorama, the largest residential tower south of New York.

Now his dream had to be put on hold. Alvarez underwent another chest biopsy and bone marrow biopsy, which is a painful procedure, to confirm his diagnosis. The cancer came back as stage three, but the good news was – it hadn’t spread.

He began aggressive chemotherapy – a total of six cycles every 28 days, followed by 20 radiation sessions within a month. His mom and brother quit their jobs to care for him. Throughout it all – he kept emailing his professors and trying to keep up with his coursework.

“Initially, he was very bright eyed and very good with attending classes. Sometime throughout the semester, he went through a crisis and was diagnosed with cancer,” said Shoal Laha, an associate professor in the Department of Civil and Environmental Engineering. “He was still trying to make an effort, and he did complete the class. I was very impressed with that.”

Alvarez credits his teachers with being understanding, calling and even visiting him, including his advisor, Joanna Sanabria. While undergoing chemo, he couldn’t be around crowds because he’d be at risk for getting sick. His professors would allow him to take exams during off hours, and his girlfriend would drive him to FIU.

The weekend before commencement, Alvarez underwent another scan. The results – all clear! Doctors say the next five years are critical so he continues to get checkups and blood work to ensure he is cancer-free.

In the spring, he will be returning to FIU to get his master’s in civil engineering. He wants to focus on structural engineering and eventually start his own firm here in Miami.

“I want to leave a legacy – you see nice buildings, and I want my children, and grandchildren, to know their father helped design and build them.”