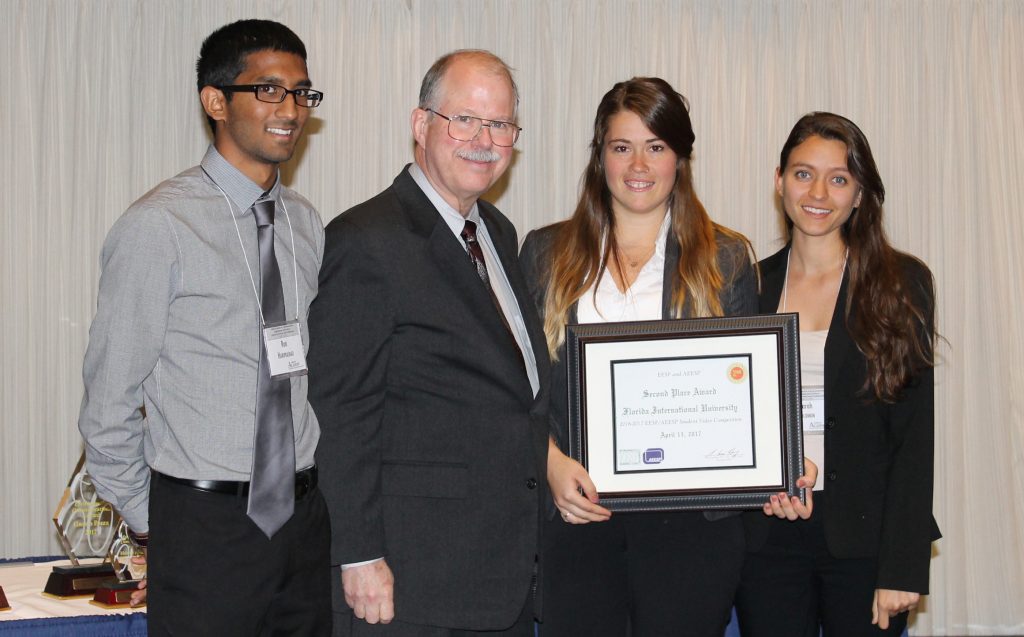 The AAEES FIU Chapter was recognized by the Environmental Engineering and Science Foundation (EESF) and the Association of Environmental Engineering and Science Professors (AEESP) for 2016-2017 EESF/AEESP Student Video Competition. The team comprised of Allyson Tombesi (team leader), Ron Hariprashad and Sarah Solomon. The students placed second in the 2016-2017 EESF/AEESP Student Video Competition to increase awareness on climate change.

The purpose of the competition is intended for both groups and individuals to create a video to motivate individuals to change daily habits that cause carbon emissions that may contribute to climate change. People have varying views on climate change. Contestants are urged to develop a message that acknowledges the breadth of opinions on this issue, but that encourages everyone to make changes that will help with climate change. Since most people do not understand the roles of environmental engineers and scientists, the video should end with a brief reference as to how they are working on climate issues.

“Teams of undergraduates and graduates studying environmental engineering and science were challenged to create 2-3 minute videos on the topic: “What can individuals do to help reduce climate change?” The target audience was 8th grade and higher students as well as the general public. Entries were evaluated on their effectiveness in reaching target audiences, creativity, accuracy, and plans for distributing the final video product. Each video also addressed the roles of environmental engineers and scientists in solving climate related problems.” publicized by EESF/AEESP.

AAEES FIU Chapter team’s video is titled “Take Action on Climate Change.” The student team has defined the video as “intended to motivate and teach young adults how they can impact climate change through their own day to day activities. This includes things such as turning the lights off when leaving a room, turning the faucet off while brushing your teeth, and reducing the amount of waste produced when grocery shopping. Changing daily habits can help significantly reduce how much carbon is emitted into our atmosphere and in turn change the rate at which climate change occurs. This video will also help the audience understand how environmental engineers and scientists play a vital role in helping to reduce carbon emissions and understanding how it affects climate change.”

The students were presented their award at the Excellence in Environmental Engineering and Science banquet luncheon at the National Press Club in Washington, D.C. on Thursday April 13, 2017.

Allyson Tombesi is a senior in the undergraduate program pursuing a bachelor of science in environmental engineering. She is currently the President of the AAEES student chapter at FIU. She recently got accepted into a competitive summer internship program at the Savannah River Environmental Science Field Station offered through the University of South Carolina at Aiken.

Ron Hariprashad graduated with his bachelor of science in environmental engineering in the fall of 2016. He is in the graduate program pursuing a master of science in geosciences at FIU’s Earth and Environmental Science Department. He currently works for the Applied Research Center, where he has a fellowship with the Department of Energy building hydrological models for the transport of contaminants in surface water flow of the Tim’s Branch Watershed. He is spending his summer internship at the Savannah River Ecology Lab collecting cross sectional data for the Tim’s Branch stream, water quality data, sediment distribution, biofilm collection, and flow measurement.

Sarah Solomon is a senior in the undergraduate program pursuing a bachelor’s of science in environmental and civil engineering. She currently works for the Applied Research Center, where she has a fellowship with the Department of Energy doing experimental microbial research with uranium. She is spending her summer internship at the Savannah River Research Campus conducting experiments to develop methods for the efficient measurement of methymercury using diffusive gradients in thin film technology.