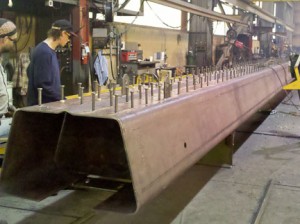 The mission of the conference was to transfer ABC education to industry professionals in hopes to develop a next-generation ABC workforce that will propel ABC techniques to become the new standard in bridge construction. The conference also served as a networking experience for industry peers.

According to the ABC-UTC website, most roads in the nation are over 50 years old and were originally built to withstand much less traffic than they currently do. This has led to rapid deterioration and the need to replace significant roadway portions.

“Of the nation’s approximately 600,000 publicly-owned vehicular bridges, approximately a quarter are either structurally deficient or functionally obsolete. Accordingly, highway delays cost the nation more than $121 billion in 2011, and it continues to increase, while affecting the U.S. society also on the environmental, and health fronts,” states the ABC-UTC website.

How can ABC drastically reduce the issues associated with conventional bridge construction? ABC reduces the frequency and duration of work zone disruptions which leads to a reduction in: construction-related traffic accidents, traffic delays, tailpipe emissions, and poor system reliability.

ABC techniques can cut months and even years off the time it takes to build a bridge. For example, the “sliding” technique allows a section of a bridge to be built alongside the one in need of replacement without closing roads or negatively affecting traffic. Once the replacement section is ready, the bridge is closed for a few hours or days (usually at night when there is less traffic), the old section is lifted out, and the new one is slid into place.

“Florida was an early disciple of ABC, starting with the replacement of the Graves Avenue bridge on Interstate 4 in Orlando in 2006, which was accomplished with just two nights of closures,” said the Miami Herald.

Also according to the Miami Herald, ABC projects cost 20 percent more than conventional bridge construction. However, taxpayers are more likely to be on board with the extra cost of these projects when they experience the benefits of less traffic delays due to work zones and see bridge improvements completed faster than ever before.

ABC techniques are not new. In fact, such building techniques were used centuries ago during railroad construction. Other ABC techniques, such as pre-casting components of bridges off-site, have been used for decades as a way to save money. The difference now is that engineers no longer wish to use bits and pieces of ABC. Instead, they want to use it as a complete new standard for bridge construction.

With the success of this year’s National Accelerated Bridge Construction Conference, hopes are high for the next one which will take place on December 6-8, 2017 in Miami, FL.