The IAHS, whose motto is “Progress Through Interdisciplinary Cooperation and Research,” is a non-profit, educational, scientific world organization chartered in the United States in 1972. In May 1979, IAHS was placed in the United Nations Roster as an accredited Non-Government Organization by the Economic and Social Council (UN ECOSOC). Since its inception, 40 IAHS Congresses have been organized in various countries located around the world.  Two of these global events (1975 and 1983) were held at FIU.

According to the IAHS, to be able to have a successful housing project, whether it’d be national or local, one has to identify the scientific topics to be incorporated in the planning and analysis.  The Civil and Environmental Engineering topics are the basic requirements for the process.  For example, can anyone minimize or delete topics associated with the design and construction of infrastructures and superstructures for housing projects? The foundation designs and structural designs for the high-rise buildings demand detailed knowledge to respond to the design forces created by the unusual earthquakes and winds. FIU’s “Wall of Wind” research center will contribute to the studies of these extreme situations.

Another important topic for IAHS is the environmental impact of a housing project to the community.  This includes the new demographic changes and increases affecting the transportation systems, including the availability of public parking, bicycle roads, and open spaces.  Besides these tangible effects, we have to be aware of the problems which will be introduced due to the increases in the population densities. Lately, the high-densities created by the high-rise urban housing structures, mainly in the developing countries bring additional responsibilities to the housing scientists.

The IAHS World Congresses, the previous 39 Congresses, created a scientific platform, to provide an opportunity to discuss the manuscripts submitted to the Congress.  The multi- disciplinary and also inter-disciplinary nature of the housing sciences, attract numerous engineers and scientists who share their research results and innovative concepts. Housing sciences related to the development of large projects are dynamic in nature. The fast changing and expanding knowledge base must be a part of all planning, analysis, design and construction processes.  The field of Civil and Environmental Engineering leads the team as it incorporates numerous related topics such as foundations, transportation, structural analysis, structural design, materials, environment   and data processing.

The Congress requires that all the submitted manuscripts be a part of the decided theme and sub-themes.  The accepted papers are reviewed by an independent review-board.  Thereafter, all the reviewed and accepted manuscripts are published as the official Proceedings of the congress. 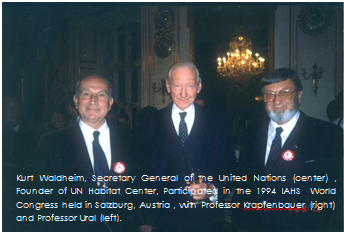 So far, there are forty volumes published either as hard copies or in digital format.    Besides the publications of the Proceedings, few selected impact papers are published as the Special Issue of the International Journal for Housing Science.  This Scientific Journal has completed its 37th year of publication.

IAHS is glad to come back to the FIU Campus and continue its global scientific activities as it has done for so many years.