In 2012, the Post-Tensioning Institute (PTI) published the updated PTI M55.1-12, Specification for Grouting of Post-Tensioned Structures.1 The reason for this update was to address concerns related to high chloride content, grout segregation, and to strengthen the provisions to minimize bleed water, as well as ensure proper construction. An article in the Fall 2012 issue of ASPIRE™ gave a background and details of this update.2 An addendum to the grouting specification issued in 2013 includes further steps in ensuring quality grouting that is essential for durability of post-tensioned structures 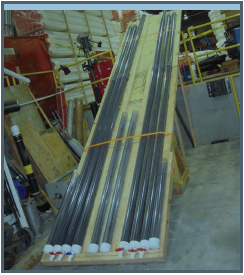 The inclined tube test is a large scale bleed test

2012 Grouting Specification :A summary of the changes in the 2012 edition of the grouting specification follows.
• Additional and independent field testing for acid-soluble chloride ion (Cl-) was introduced to be performed in accordance
with ASTM C1152 on the mixed grout once per project and a minimum every 40,000 lb of grout.
• Limits on the Blaine value4 of the cement used in grout were introduced. The Blaine value is a measure of the cement’s fineness. It has a strong effect on the homogeneity of grout. Cements with a Blaine value too low tend to easily flocculate (form lumps) and may cause segregation. Cements with a too high value require more water and admixtures to wet the surface, and tend to have earlier setting times.
• The bleed testing is enhanced with the introduction of the inclined tube test that is much more realistic reflection of a draped tendon in the structure, with its length of 16 ft at an angle of 30 degrees and with 12 strands in each sample (Fig. 1).
• The wick induced test has also been revised to be more representative of actual conditions in a tendon by increasing the length of the test specimen using a 40-in.-long tube instead of the old short graduated cylinder.
• The range of the constituent materials is now also given for the Class C (prepackaged grouts); in the previous edition, this was only given for the Classes A and B (the basic and engineered site-mixed grouts).
• The grouting operations and production testing were adjusted as well; the wet density and flowability are now measured at the mixer as well as at the outlet so that the grout quality and consistency within the tendon can be monitored (Fig. 2). The flushing of tendons is no longer permitted. Prewetting of ducts inadvertently adds water to the mix and flushing in cases of grout problems creates a situation that is very difficult to repair. Finally, low grouting pressures and no pressurization of the tendons after grouting are recommended.

Specification Addendum :The changes introduced in the 2012 edition of the PTI specification, if properly followed and enforced, will be very effective in controlling bleeding and the level of chloride in grout. However, research and field investigations by the Florida Department of Transportation (FDOT) and others continue to raise concern regarding the causes of and
problems associated with segregated grout. Under some circumstances, the constituents of some prepackaged grouts can separate during grout injection leading to areas where the grout
does not harden (for example, “soft grout”). The segregated material has been observed to be corrosive in some cases, even without the presence of chloride. In June 2013, the PTI M-55 Grouting Committee published Addendum No. 1 to PTI M55.1-12 Specification for Grouting of Post-Tensioned Structures5 to further address the “soft grout” issue. This document is now
officially a part of the grouting specification and should be referenced with it. Ongoing research at the University of Florida
at Gainesville is attempting to determine the exact cause(s) of grout segregation. Preliminary findings indicate that the addition
of aggregates and inert fillers to the grout mix, and improper storage of grout may contribute to the segregation of the constituent materials. Other research by FDOT and Florida
International University has found that when grout segregation (soft grout) occurs, there is often a very high concentration of sulfate in the segregated material, which is believed to increase the corrosion potential in the tendon. In response to this research and the ongoing concern about grout segregation, the following changes were included in Addendum No. 1:
• For jobsite (Class A and B) and prepackaged (Class C) grout mixes, the addition of aggregates and inert fillers is now prohibited. These materials can only be used in special Class D grout approved by the design engineer for a specific project need.
• Mineral additives and admixtures shall not contain sulfates.
• The limits for Blaine values for cement were revised to be between 300 to 400 m2/kg to more closely match cements produced in
the United States.
• Only mineral additives and admixtures specifically listed in the specification may be used. Only undensified silica fume shall
be permitted. Although sulfates in high concentration occur only in the areas of soft grout, no supplemental cementitious materials or chemical admixtures may include sulfates, besides those already contained in the permitted constituent materials. The grout
ingredients are limited to those specifically permitted

Summary :The PTI M-55 Grouting Committee is actively working with all stakeholders on the next edition of the grouting specification to include the latest knowledge and research. The present specification with the addendum should be referenced by specifiers as it represents the latest developments and research performed in the field.