South Florida Bridges On The Brink

SOUTH FLORIDA BRIDGES ON THE BRINK(VIDEO)

MIAMI (CBSMiami) — Earlier this year, Miami-Dade engineers sounded the alarm over Key Biscayne bridges that are actually crumbling into the ocean. In a panic, nearly $31 million dollars was shelled out for emergency repairs. Now documents uncovered by CBS4 reveal another set of bridges supposedly next to crumble and the tab to fix it is much bigger. 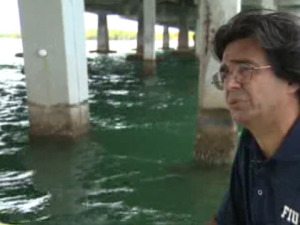 Right now construction crews are hard at work repairing the Bear Cut Bridge on Key Biscayne. The 70-year-old bridge everyone agrees should be replaced is instead getting a $31 million dollar makeover.

Dr. Atorod Azizinamini, the chair of the civil engineering department at Florida International University and a world-renowned bridge engineer surveyed the work with CBS4 in April 2013. He said then, “You may have been better off to just build a new one.”

When CBS4′s David Sutta dove below the water line of the Bear Cut bridge in April, he discovered giant pieces of concrete that had fallen off the pilings, pushed away from corrosion inside. Many pieces longer than your arm were all over the ocean floor.

The quick fix that Miami-Dade politicians signed off on was something called jackets. It is essentially pouring more cement around compromised pilings. It’s a well-known industry practice but not expected to last for very long.

The other plan county engineers moved forward with was much more controversial. They chose to keep 70-year-old pilings in place with a new roadway on top.

“This brand new bridge was built on 70-year-old pilings,” Miami-Dade Commissioner Juan Zapata said. “So those pilings have already reached their life expectancy. So as soon as that upper part, the superstructure is built on the bridge, we are going to start now planning to replace that bridge completely.”

Commissioner Zapata thinks the whole idea is ridiculous but they were caught in a situation with little choice. County engineers maintained they didn’t have enough time to design and build a new bridge. They said the repairs had to be made.

Zapata is still concerned because despite the band-aides on the Bear Cut Bridge, it’s still at the top of a new county report of failing bridges. The 18-page memorandum paints a dire picture of the county’s 209 bridges. It also asks for nearly a half a billion dollars to repair or replace them. That money doesn’t exist. “$450 million dollars. That’s today’s dollars. The longer we wait the higher the cost becomes,” Zapata said.

Number 2 on the list, behind Bear Cut, is the Venetian Causeway. Built in the 1920’s, the series of 12 bridges is the lifeline to 400 plus homeowners and thousands of cars a day headed to and from Miami Beach. Engineers say they need $110 million to replace the bridges, soon. However the report indicated they have zero saved to do the work.

Jurgen Brendel, president of the Venetian Homeowners Association found the report concerning. “You always get immediate action when something happens. When a bridge falls down, breaks, somebody – the bus falls in there, then it gets done right away. Then they’ll find the money,” he said.

The report should be alarming for Venetian Island residents. On a scale of 1 to 100, one of the Venetian bridges gets a 32. That’s a failing grade. But Dr. Azizinamini doesn’t see it. “These are in pretty good shape,” he said as CBS4 News inspected them from the water.

The County renovated the Venetian bridges just 15 years ago and they appear to be holding up quite well. Dr. Azizinamini explained, “I think you need to get a better picture of the condition of these bridges. Just like a patient that goes to a doctor. Unless you go under the MRI machine the doctor is not going to know what is really wrong with you and what is the best and most effective procedures.”

With so many aging bridges on this list, Azizinamini worries the county may be about to waste even more money. “You need to understand which one is more critical. Where you should spend your money. $500 million dollars is significant money,” he said. Commissioner Zapata added, “We just need to have a plan. We need to be proactive about this. Because just expecting them to get better on their own is not going to happen.”

In fact, the Bear Cut Bridge appeared to be worse off than when CBS4 News last saw it. As Dr. Azizinamini watched the construction crews working on the bridge, he shook his head. “This is more of a conventional way of doing things,” he said.

Azizinamini couldn’t help but wonder why his team of experts at FIU are developing cutting edge technology for a $4 billion dollar bridge in New York City, but not here. “They came to us and they are using some of the technology that we have developed here,” Azizinamini said. But here in Miami-Dade County, the County and the school haven’t even spoken to each other. “Hopefully we will soon,” Azizinamini said.

FIU’s technology actually extends the life of bridges. And when it comes time to replace them, they do it in huge spans with most of the bridge or lane closures happening only at night. It’s fast, efficient, and economical. Everything the plan to save the Bear Cut Bridge was not.

Brendel, the president of Venetian Homeowners Association, is worried about a repeat of what happened in Key Biscayne. “Who would even think of putting a new bridge on old pilings? I mean forget it. In business you would be out of business. Here they continue getting a paycheck,” he exclaimed.

And you’re paying for it. This summer the tolls for the Venetian and Rickenbacker Causeway went up. With this new report, tolls could go even higher as politicians look for ways to raise nearly a half a billion dollars. There are suggestions of raising tolls as high as $5 to expedite the fundraising. All of the money going towards repairs and replacements that may or may not be needed.

The renewed Bear Cut Bridge will open up sometime next year. Around that time county engineers will start on plans on how to tear it down and start anew.

For South Florida Bridges On The Brink Video Click here